The shape of life, we believe, is sound.

Around 3.5 billion years ago, following formation of the oceans, the first primitive life forms are believed to have evolved in the primordial oceans. Recent research suggests that simple amino acids were brought to earth by comets, effectively ‘seeding’ the oceans with organic compounds, helping to enrich the primordial ‘soup’ from which life sprang. Is there a genuine connection to be investigated, the tantalizing possibility that sound was involved as an organizing force for minerals and for organic compounds brought to the early earth by comets? 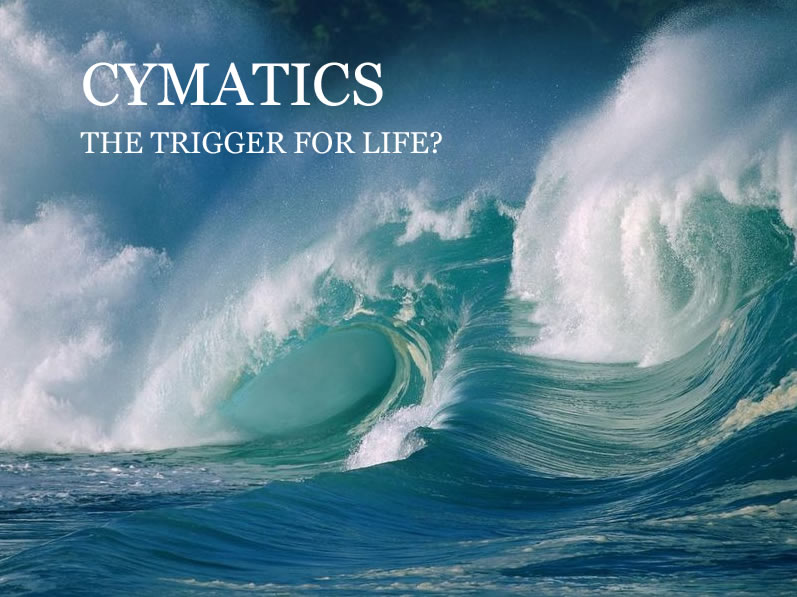 Ancient spiritual traditions from many cultures speak of sound as pre-existing the formation of the Universe. Sound was seen as a formative force of Creation and the words of St John’s gospel are a good example:

In the Vedic Brahmanism tradition of northern India (circa 1500 BCE) the theme is strikingly similar to St John’s Gospel: “In the beginning was Brahman, with whom was Vak [the word] and the word is Brahman …by that word…he created all things whatsoever.” (Translation from The Garland of Letters by Sir John Woodroffe.)

An even more ancient text, ‘Aintiram’, is thought to have been written during the first Sangam period in the Tamil region of southern India and may date to circa 3000 BCE or even older. It contains many sections relating to sound as “OM” and is described as a huge wave of the ocean of The Primal Source…” (V 6, Pranava Veda, translation by Dr. S.P. Sabharathnam). 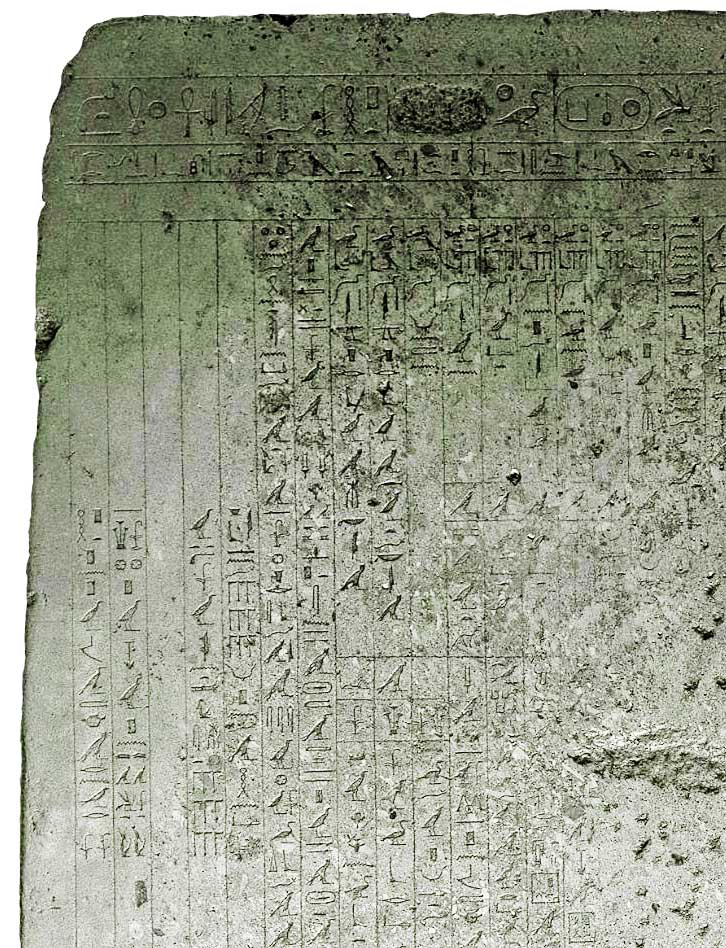 Another important source of the concept of sound as a formative force of creation originated, as with so many aspects of our present day culture, with the ancient Egyptians. In 1805 an ancestor of Princess Diana, the second Earl Spencer, gifted an ancient Egyptian stone to the British Museum where it remains to this day.

How the stone came to be in the possession of Earl Spencer remains a mystery, but the ‘Shabako Stone’ commissioned by pharaoh Shabako, around 705 BCE, is considered by some experts to be the most important Egyptian text, with the exception of the ‘Rosetta Stone’, from which all hieroglyphs were translated.

The Shabako Stone tells of the god Ptah, the cosmic architect who created the entire Cosmos simply by uttering words. Lines 56-57 of the text state:

“Lo, every word of god came into being through the thoughts of the mind and the command on the tongue.”

These ancient traditions are now being validated by a mainstream model of the Universe in which sound is theorised to have been responsible for ordering and structuring matter. According to Dr. Daniel Epstein, professor of astronomy at the University of Arizona, sound played a key role in what he terms the “plasma epoch” of the Universe:

“Relativistic sound waves raced through the hot plasma that filled the universe for its first 380,000 years. That sound left an imprint that is still discernible in the cosmic microwave background and also in the large-scale distribution of galaxies”.

But was sound also responsible for triggering life? The hypothetical model we have developed was inspired by the ancient traditions of Creation and demonstrates that sound and cymatic forces could have worked together to become the dynamic force that created the first stirrings of life.

Around 3.5 billion years ago, following formation of the oceans, the first primitive life forms are believed to have evolved in the primordial oceans. Recent research suggests that simple amino acids were brought to earth by comets, effectively ‘seeding’ the oceans with organic compounds, helping to enrich the primordial ‘soup’ from which life sprang. The CymaScope team worked with sounds derived from Comet 67p’s interaction with the solar wind.

Surprisingly, many of the sounds, when rendered visible with the CymaScope instrument, were found to contain life-related geometries. The European Space Agency’s Rosetta spacecraft and Philae lander found evidence of organic compounds in the comet’s dust-covered surface, supporting the ocean-seeding hypothesis.

Our Comet 67p video can be viewed here:

Accepting that the oceans were seeded from space does not explain the structuring and organizing force that triggered life, a puzzle that continues to baffle biologists. Many scientists have come to believe that fierce lightning storms ripping through the early atmosphere were the magical ingredient that literally ‘sparked life’. In the classical Miller-Urey experiment, created in 1952, a glass jar was filled with a small quantity of methane, ammonia, hydrogen and water (thought to have been present in the surface pools of the early earth) then sealed.

The concoction was irradiated with sparks for a week (simulating lightning), resulting in a chemical soup in which it which five amino acids were positively identified. 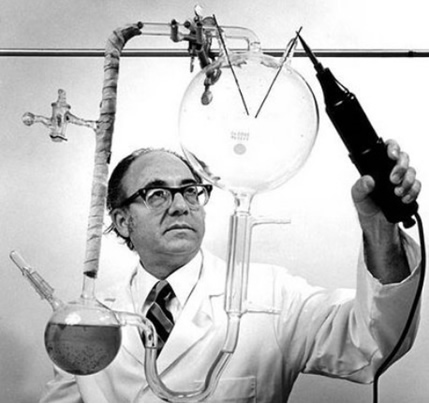 In a 1996 interview, Stanley Miller recollected his lifelong experiments following his original work and stated: “Just turning on the spark in a basic pre-biotic experiment will yield 11 out of 20 amino acids”.

But even a flask full of amino acids does not explain how life emerged on earth. Without an organising force it is similar to considering how long it would take for a flask full of watch parts to form into a working watch by means of the random arrangements created by a flask shaker.

The obvious answer is: never.

The notion of sound in the early oceans leads us into an interesting area of conjecture that is supported by many CymaGlyphs captured in the CymaScope laboratory. Morphologies spontaneously and frequently appear that are reminiscent of early life.

The images below show five examples of many. In each case the actual life form is shown left and its corresponding cymatic equivalent is shown right.

Is this simply pareidolia, the tendency for us to see what we want to see? Or is their a genuine connection to be investigated, the tantalizing possibility that sound was involved as an organizing force for minerals and for organic compounds brought to the early earth by comets? 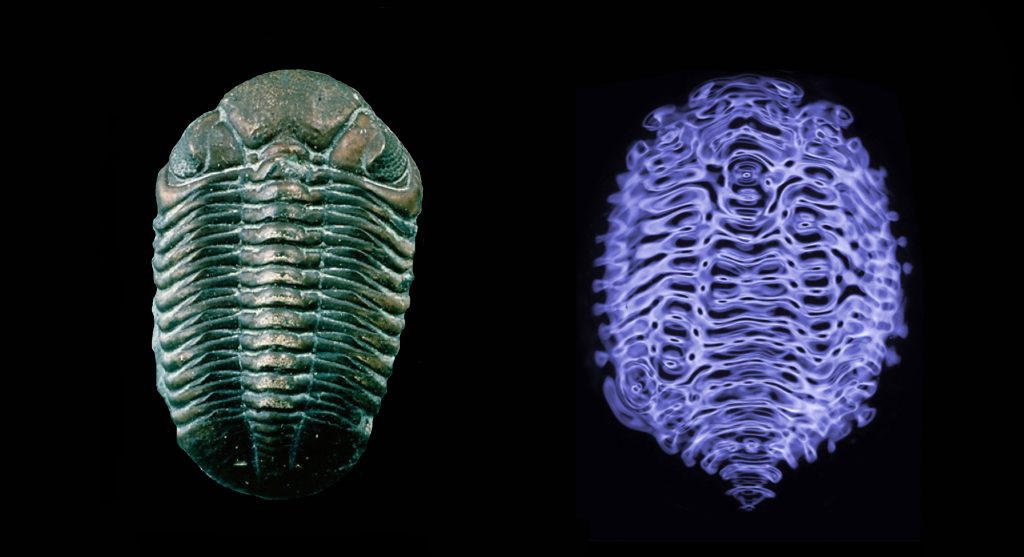 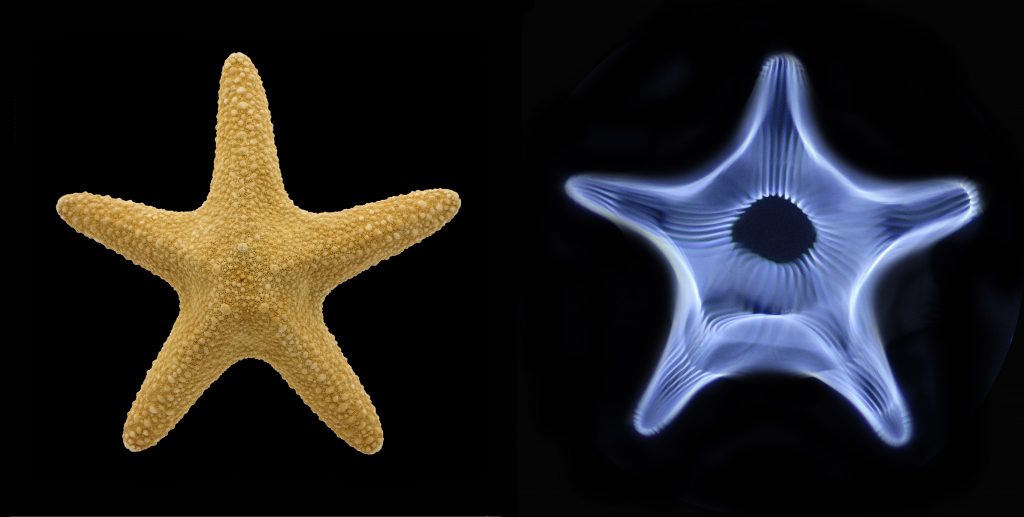 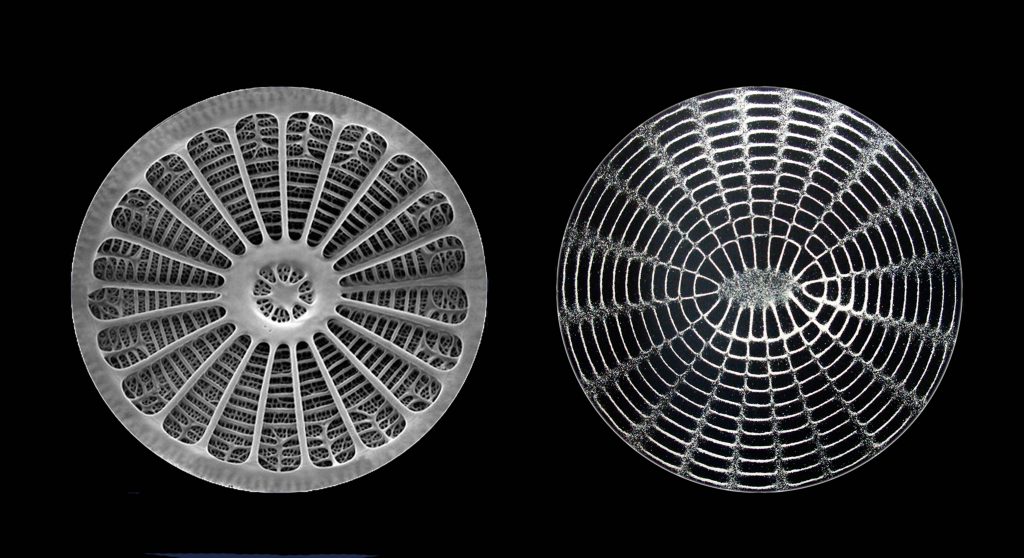 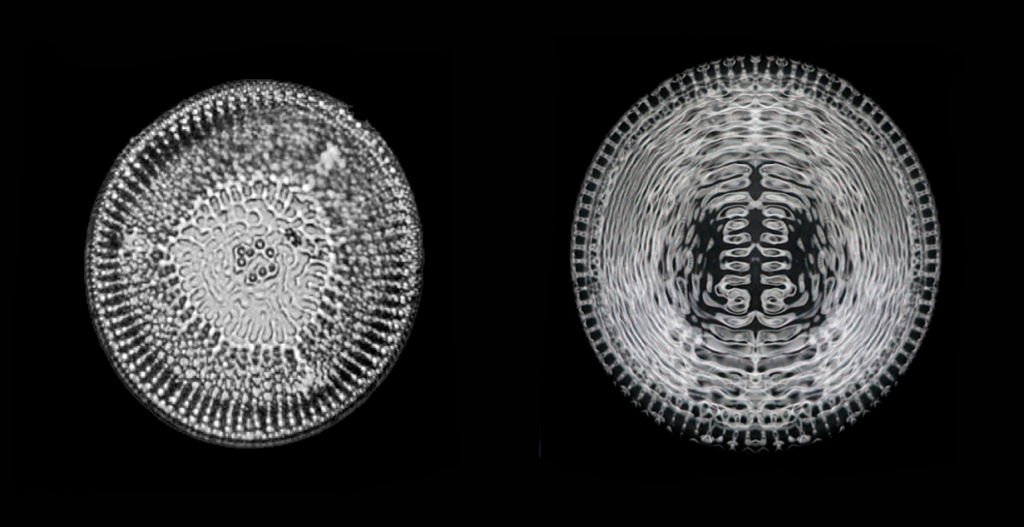 Neat as the Stanley Miller hypothesis sounds it falls short in modelling how the building blocks of life were assembled. What force was at work to cause the building blocks to coalesce, begin to replicate and create form from formlessness? We believe, just as the ancient seers prophesied, that the creative force was the most obvious and potent of all: sound. When sound interacts with matter cymatic forces organise the matter into microscopic and macroscopic structures that we call “sonic scaffolding”.

Of the several competing theories for the creation of life, most envisage primitive life forms arising in the harsh environment around hydrothermal vents on the ocean-floor. Accepting this as a foundation, let us explore how sound and cymatic forces could have triggered life. 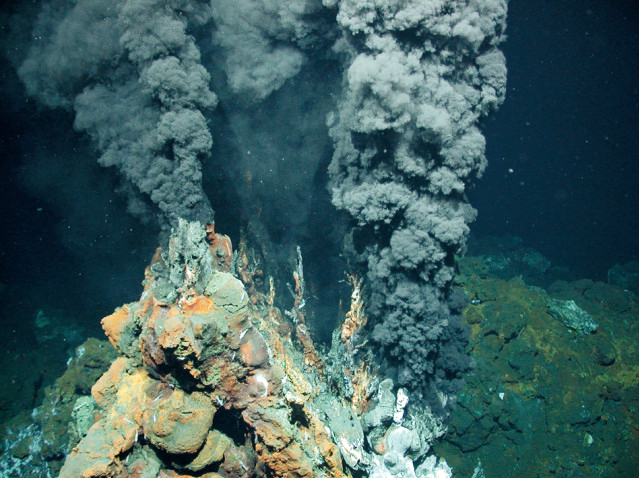 It is important to note that pure sounds can create geometric cymatic structures on the surface of microscopic bubbles. In searching for a possible source of pure sound in the early oceans we originally envisaged sound created by wind-driven storms. During such energetic storms the wave action at the ocean surface creates broadband white noise that theoretically contains all frequencies of sound. As this noise penetrates the water the high frequencies are immediately filtered out because water acts as a natural acoustic filter. When the noise has passed through around 100 feet of water only fairly pure low frequency sound remains.

They state that “…the tones that are generated will depend strongly on the vent’s morphological structure, and each vent within the vent field is likely to have its own unique acoustic signature.”

Thus, we have two potential candidates for the source of pure sound that triggered or shaped life.

In our life-forming hypothesis, elements emerging from the hot vents mixed with organic compounds seeded from space. This mixture found a safe haven in the nodal areas of the microscopic bubbles created by the accompanying pure low frequency sounds in the vicinity of the vents. The nodal regions of the sounds imprinted on the microscopic bubbles were, in effect, sonic scaffolding, which organised the minerals and organic compounds. Put simply, in this model, life formed in the stillness of cymatic patterns on the surface of microscopic bubbles. The patterns of stillness were geometric in shape, for example dodecahedron or icosahedron. Adjacent to these still areas were areas of dynamic vibration, which we could think of as the dynamic creative force.

Some support for the possibility that the sounds from hydrothermal vent were a potent organizing force in the early earth comes from work by George Rice of Montana State University. In a Yellowstone National Park thermal pool he discovered a virus with icosahedron morphology and a lineage stretching back 3.5 billion years, leading to the intriguing possibility that the earliest life-forms may have been viruses rather than bacterial life. The fact that the virus has a geometric morphology is highly suggestive that sound may have been involved in its creation. The image below is a transmission electron micrograph of Sulfolobus Isosahedral Turreted Virus, discovered by George Rice. 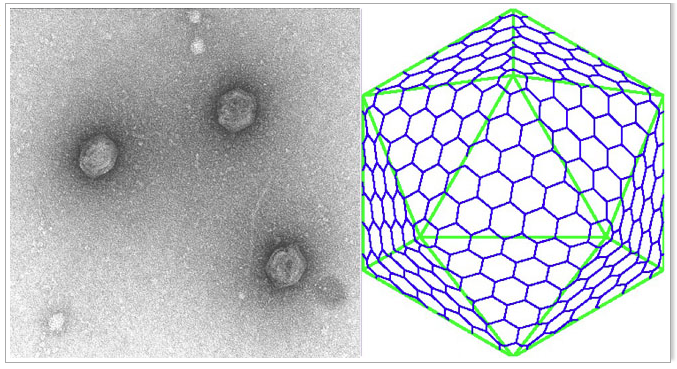 When we use the CymaScope to study the visual geometry of sounds, we see that they include many of the mathematical constants of the universe, including phi, sometimes known as the ‘golden mean’. This ratio is approximately 1 to 1.618 and it is found in all living things, thus demonstrating the connection between sound and life. The reason that all living things have the phi ratio imbedded in them may be because the phi ratio is mathematically imbedded within sounds that are devoid of harmonics, sounds that we might label as “pure”, and do not contain the rich complexity of a musical sound. For example, the pure sounds mentioned earlier arising from hydrothermal vents, due to Helmholtz resonance. Such pure sounds contain the all-important phi ratio and they create sonic scaffolding that is a strong candidate for triggering, organising and structuring life.

One of the many relationships between sound and phi is expressed in the following formula:

The significance of the relationship between phi and sine is that all pure sounds follow a sinusoidal law, thus, all pure sounds have the phi ratio embedded within them. If we examine the D.N.A molecule from end on (left in the image below) we see that it appears as a 10-fold form, over which can be drawn a pentagon, demonstrating that DNA, the key to life, contains phi, which is also present in every pure sound. The right hand image is a laboratory-created CymaGlyph showing similar features to the D.N.A. cross-section image.

Is this a simple coincidence? Or are these facts pointing to a real relationship between the emergence of life and the pure sounds arising from hydrothermal vents? 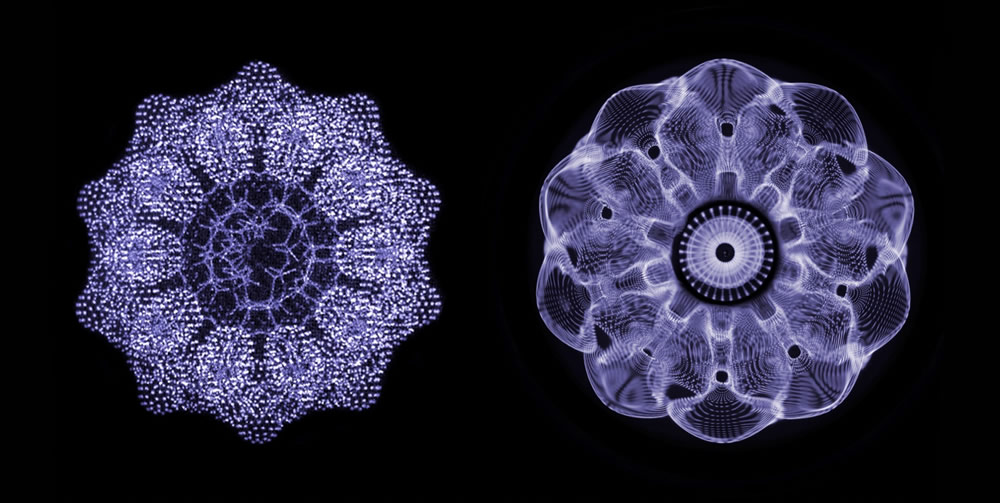 The humble starfish, from the Ordovician Era, is one of the oldest life forms on earth and displays its pentagonal geometry very clearly. 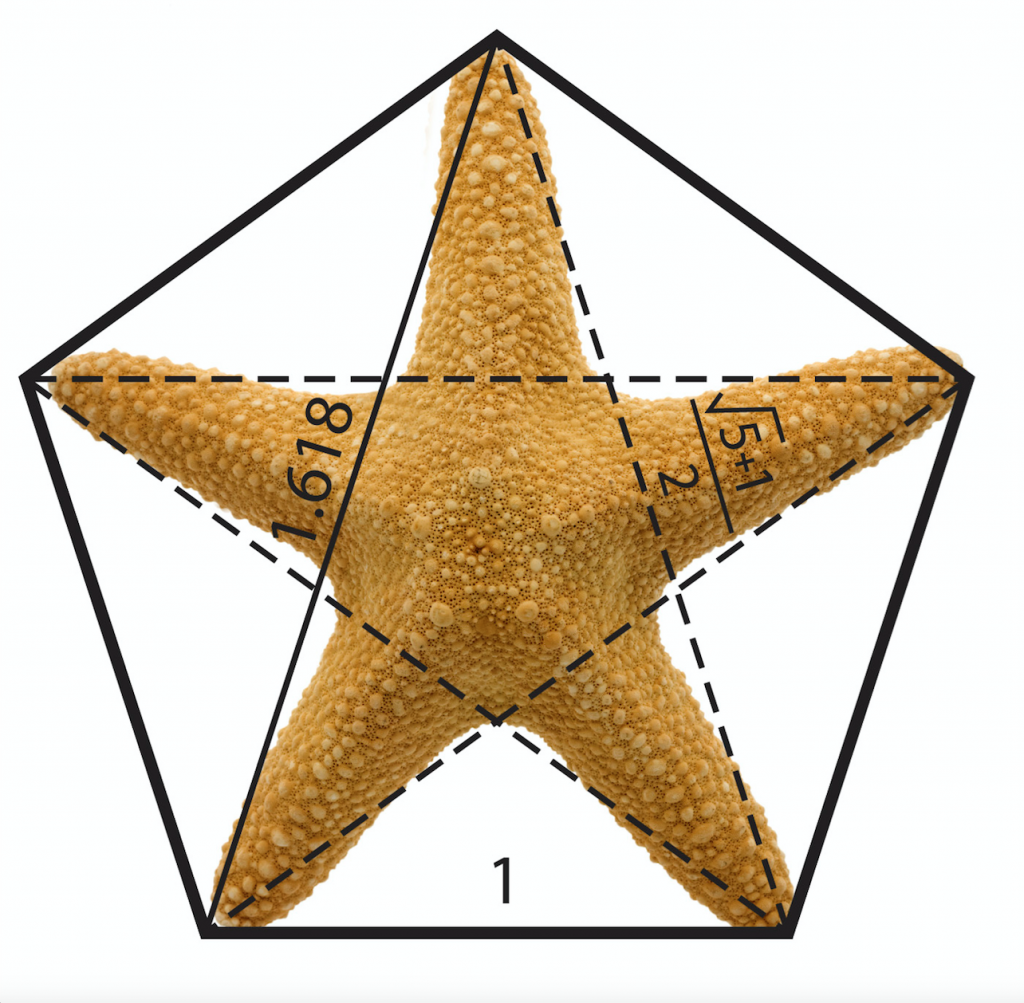 The Red-knobbed starfish goes one stage further and displays its pentagonal geometry graphically on its body. Is this a demonstration of cymatic forces at work? 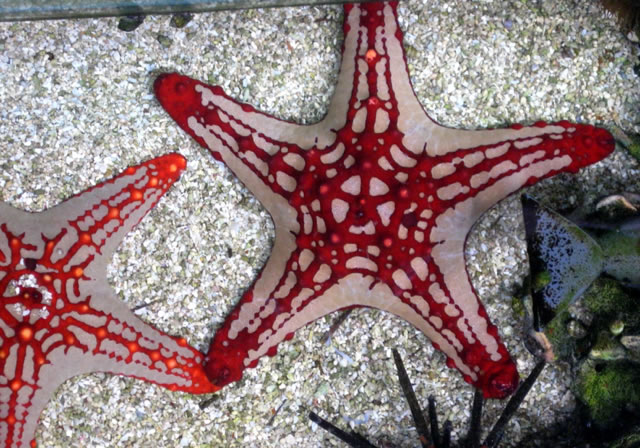 To summarise, we suggest the creative power of sound triggered life and continued to shape it, a process that is probably just as much at work today as it was in the primordial oceans and the early eras.

The shape of life, we believe, is sound.