The Science of the CymaScope

Read about the science behind the Cymascope 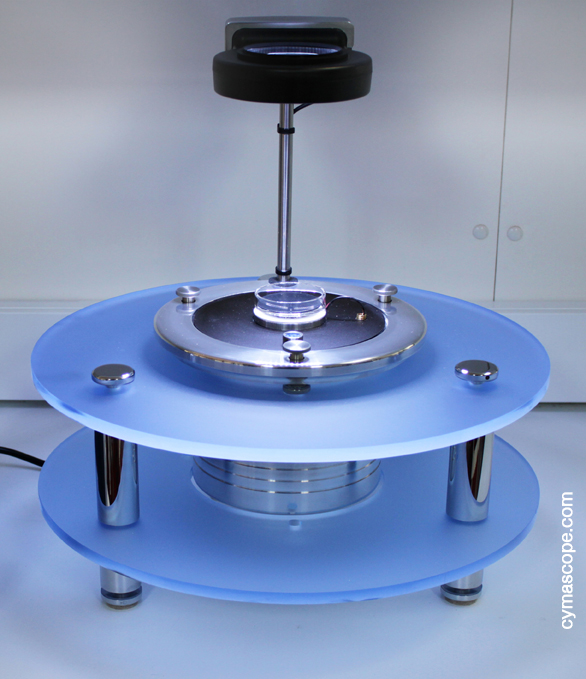 The CymaScope is a new type of scientific instrument that makes sound visible. Its development began in 2002, with a prototype that featured a thin, circular, P.V.C. membrane; later we used latex. Fine particulate matter was used as the revealing media. However, it was soon discovered that far greater detail could be obtained by imprinting sonic vibrations on the surface of ultra pure water. The surface tension of water has high flexibility and fast response to imposed vibrations, even with transients as short-lived as a few milliseconds. Therefore, water is able to translate many of the sinusoidal periodicities–in a given sound sample–into physical sinusoidal structures on the water’s surface. Current limits to imprinting sound on water occur in the higher harmonics and are due mainly to there being insufficient energy available in this area of the audio spectrum to cause excursions of the surface tension membrane.

In some cases the sinusoidal structures created on the surface tension are visible beneath the water’s surface, providing partial 3D geometrical data. These surface and sub-surface structures can readily be made visible to the naked eye by the application of a light source arranged above the water’s surface, either off-axis or–when using a light ring illuminator–on-axis. Capturing the imprints, known as CymaGlyphs, is achieved by means of a conventional digital camera or camcorder arranged vertically downward toward the water and coaxial with it.
The generic term for the patterns of vibration that occur on the surface of an object when excited by an incident sound is ‘modal phenomena,’ a field of study that covers everything from vibrations in suspension bridges, to vibrations in body parts of cars, to the effects of sound on the human skeleton and internal organs. In the 1970’s this branch of science was named ‘cymatics’ by Swiss doctor Hans Jenny, a word that derives from the Greek ‘kyma,’ meaning ‘wave’ and the inspiration for the name of our CymaScope instrument. The classical view of modal phenomena is that modal patterns form as a consequence of the natural resonant frequencies, or modes, of the object or membrane; current mathematical techniques used to describe this class of phenomena say nothing about the quality of the exciting sound. Musical sounds contain many harmonics so when a circular membrane is excited by a complex musical sound the resulting modal pattern(s) are, naturally, also complex. If we sample a moment from music and analyze it in terms of its fundamental frequency and associated harmonics, and then apply that sample to, say, a circular latex membrane of known elasticity, known diameter and fixed edge, present mathematical techniques cannot predict what pattern will form on the membrane. It appears that no one has attempted to solve this problem, either because no applications for a solution have become evident or because physicists have not seen the importance of mathematically modeling such phenomena. Only the pattern associated with the fundamental frequency can be predicted with any degree of certainty. Thus, for example, the design of musical instruments remains an art rather than a science.

Mathematical modelling of the modes of vibration of a circular flexible membrane currently contain only such factors as shape and elacticity of the materials; the mathematics either describe a fixed boundary condition, in the case of a drum, or a single central fixing and a free edge in the case of a circular Chladni plate. Bessel functions and the wave equation are employed to define a finite number of normal modes, based on the natural resonances of the membrane or plate.

However, the parameters for the CymaScope are quite different to the case of the drum and the circular resonant plate. Water is free to move at the circular boundary and across its entire surface area. In addition, water responds not only to its normal modes but to any audible frequency imposed on it. In other words, within the limits mentioned above, all the primary periodicities in a given audible sound or in a given sample of music are rendered visible. The resulting patterns can be considered as analogs of the sound or music since the geometry in the resulting patterns is a function of the periodicities within the exciting sound.

The CymaScope has applications in almost every branch of science simply because vibration underpins all matter. The ability to see such vibrations permits a depth of study previously unavailable to scientists, engineers and researchers. Readers will have seen our list of research topics covering subject areas from Astrophysics to Zoology. Just as great advances in medical science have come about as the result of the microscope, and huge strides have been made in understanding the Universe with the telescope, the CymaScope instrument holds enormous potential to reveal the hidden realm of sound and vibration. Our team recently made a wonderful breakthrough in the field of dolphin language research and in Mereon research, an energy pattern that may lie at the heart of creation. However, as with all scientific instruments it is vital that the relevant maths is developed, enabling predictions to be made and dynamic systems to be modelled.

We hope you enjoy our photographic history of the CymaScope from its early beginnings in 2002 to present day: 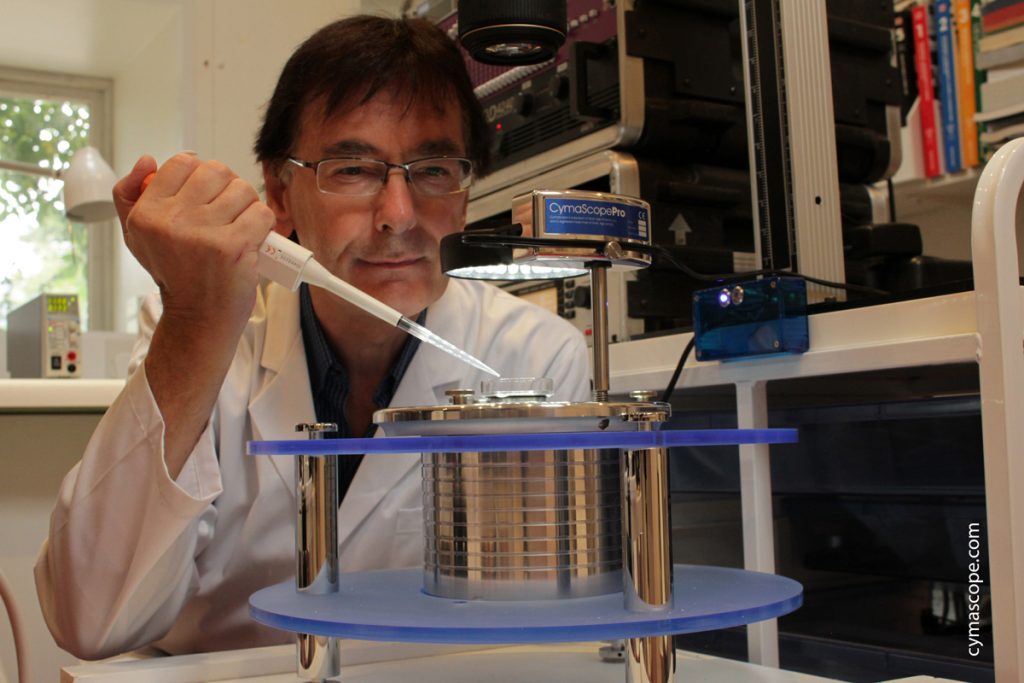 If you are a student or professor of applied mathematics we invite you to contact us to discuss a possible collaborative study. Alternatively, if you are interested in acquiring a CymaScope please use our Contact form here:

See the actual geometry of music for the first time on iPad iPhone, Android smartphone or tablet! The CymaScope app is the world’s first app to make the geometry of piano sounds and music visible. The imagery you will see is not a computer simulation; all the beautiful imagery in the app was created on a physical CymaScope then stored in digital memory for you to enjoy.

Keep the CymaScope app in your pocket at all times on iPhone or Android smartphone or if you prefer a larger screen size use iPad or an Android-powered tablet.