Helen’s primary interests are in exploring light and perception through her immersive installations, which frequently draw on the laws of physics. Many of her pieces focus on what she refers to as the ‘ecosystem’ that exists between ourselves, light, and the chosen materials. Helen commented, “Light and sound are two invisible energies that are key to our perception of the world. To re-examine them I wanted to show sound as a dynamic energy whose invisible vibrations impact on physical objects. Having watched the CymaScope video of piano notes made visible I knew that the imagery was ideal to express the concept behind the work: To capture the ebb and flow of the piano’s sound vibrations while their visual beauty was projected on an apparently simple block work wall, creating a juxtaposition of simplicity merged with the complexity of the CymaScope imagery. Although concrete is usually an impenetrable material, from the other side of the wall it was possible to view the ebb and flow of energy as the light from the CymaScope projection passed through the wall via optic fibres embedded in the blocks. Hence the name of the exhibition, TRANSMISSION, the optical fibres creating scintillating glimpses of the movement of the visual piano notes. The role of telecommunications and the transmission of information was an important element of the work. The wall could transmit light and visual information, such as the shadowy outlines of viewers passing through the beam of the projector – the viewer then actually becoming part of the artwork. “The seven visual piano notes selected for the Cymascope imaging were the seven musical notes Isaac Newton assigned to the seven colours of the light spectrum.

The resulting work re- presenting both light and sound, making it possible for visitors to not only hear the piano notes as sound but also to effectively “hear” the colour spectrum being played and “see” the sound in the medium of light and movement, creating the most beautiful and mesmeric mandala-like forms. Visitors were entranced and delighted by it.” Artist, Sofie Loscher, shares Helen Mac Mahon’s interests in light and perception and exhibited her own work in the MART Gallery as part of the two-exhibit TRANSMISSION show.

John Stuart Reid commented, “Helen Mac Mahon’s use of CymaScope imagery was unique and captivating for visitors and we were delighted to support her artistic initiative with our piano notes made visible. This is the first time that the visual beauty of piano notes has been showcased in such a visually rich and imaginative way”.

TRANSMISSION ran from 6th of April to 5th of May 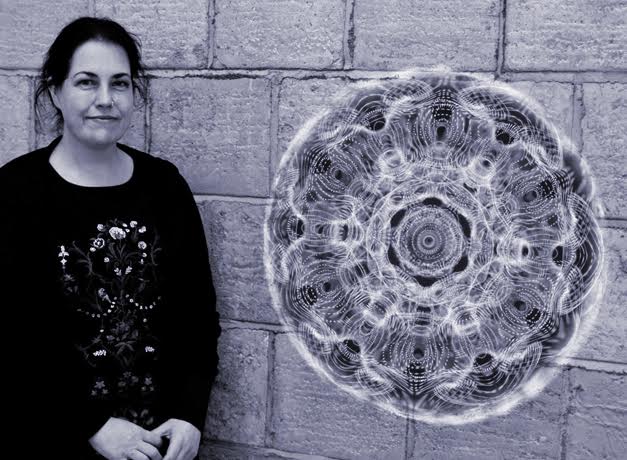