Music Medicine is a relatively new term in clinical settings, and is typically defined as “listening to music without the presence of a therapist.” 1

Patients listen to music of their own choice, typically via headphones, and physiological tests are carried out before and after such sessions. Many Music Medicine studies have shown a wide range of medical benefits for patients, as referenced in our Sound Therapy 101 article. However, the present study, described below, may indicate the need for an expanded definition of Music Medicine in which the entire body of the client or patient, or a specific part of the body, is immersed in music at a specific sound pressure level. Such immersion in a music field, or in specific sound frequencies, may provide measurable and beneficial physiological effects, as distinct from the benefits associated with listening to music via headphones.

Based on studies that have demonstrated a link between organogenesis and sonic frequencies, 2,3 and other studies that have shown the efficacy of therapeutic ultrasound and audible sound in supporting human illness, 4,5,6,7,8, John Stuart Reid hypothesized that the underlying audible sound and ultrasound mechanisms that support plant growth physical trauma, may also extend the lifespan of human cells. Some of the greatest discoveries in science have been the result of intuitive hunches and this study revealed hitherto unknown aspects of cell biology.

Inspired by Pythagoras’ belief concerning music and health,8, in early 2015 John Stuart Reid conceived experiments to test the 2,500 year old hypothesis. Early in 2017, Emily Abbey of Roadmusic.co, suggested considering using blood as the source of the human cells to be tested and conjectured that our appreciation for a specific genre of music might be related to blood group (a factor that we plan to test in future experiments). Reid reached out to Sayer Ji, founder of GreenMedInfo.com, who enthusiastically agreed to support the experiments, and in late 2017, the Experiment.com bid for funding support was launched. By early 2018, with the generous help of GreenMedInfo.com subscribers, Roadmusic.co supporters and CymaScope.com followers, the experiment bid costs were met and exceeded, fuelling the foundations of this research.

Professor Sungchul Ji of Rutgers University and John Stuart Reid, director of research at the CymaScope laboratory, developed the experimental protocol and conducted the initial experiments in early 2018. The results were very encouraging, as mentioned in our lab report of March 19, 2018, and provided the basis for a second series of experiments in May 2019, conducted by John Stuart Reid with Professor Ji acting as consultant. Roadmusic.co provided helpful assistance with music suggestions. In addition to equipment provided as a result of generous donations by Experiment.com and GreenMedInfo.com supporters, whole human blood was funded by a kind donation from Sound4Health, a UK registered charity. 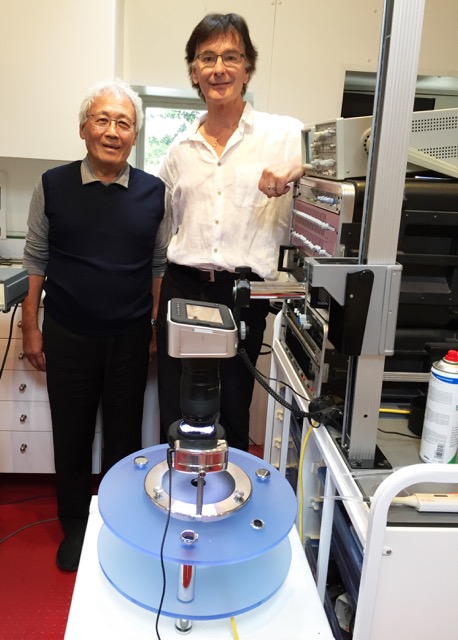 Whole blood, type O+ from a female donor, was stored in vials in the laboratory fridge at 4 degrees C. A vial was taken from the fridge and slowly raised to ambient temperature, which averaged 23 degrees C in the laboratory. The contents of the vial were shaken for 30-seconds by means of a mechanical shaker, then decanted into two vials, using a pipettor. 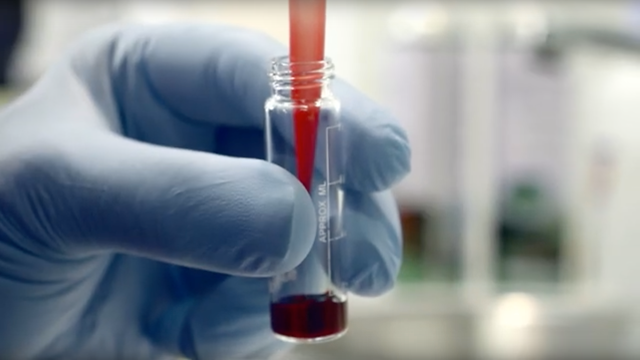 One vial was placed in the laboratory music incubator (37 degrees C) in which was located a Sony speaker, model SS-TS3, driven by an SMSL amplifier, model SA-36A. In most cases the audio signal source was an iMac computer accessing audio files in a variety of formats, mainly FLAC and WAV. The music incubator vial was immersed in a music (or other) sound field averaging 85 dBA, for 20-minutes, the sound pressure level was measured with a calibrated Castle GA214 integrating sound level meter.

Each music incubator vial was immersed in only one of the music selections. For the white noise experiments the source was a Klark Teknik DN6000 audio analyser. 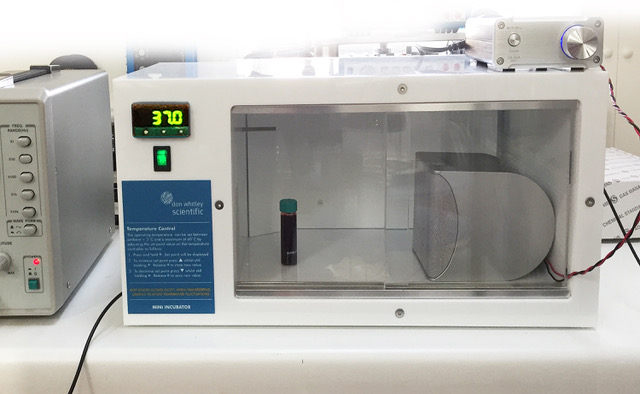 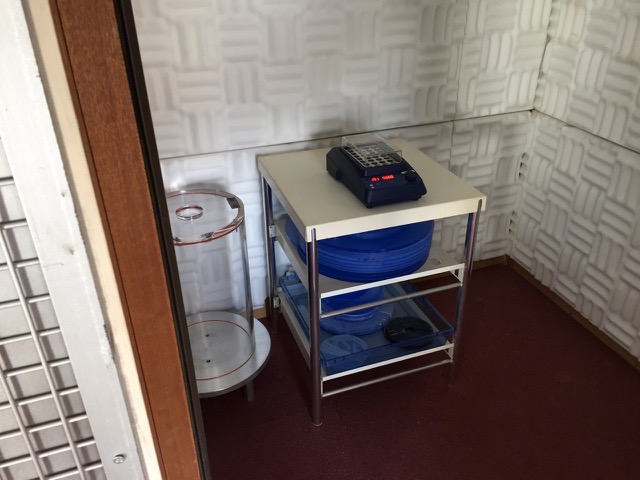 The other vial, the control blood, was placed in an incubator (37 degrees C) in the very quiet environment of the Faraday Cage (25dBA) for the same 20-minute period as for the music-immersed vial. 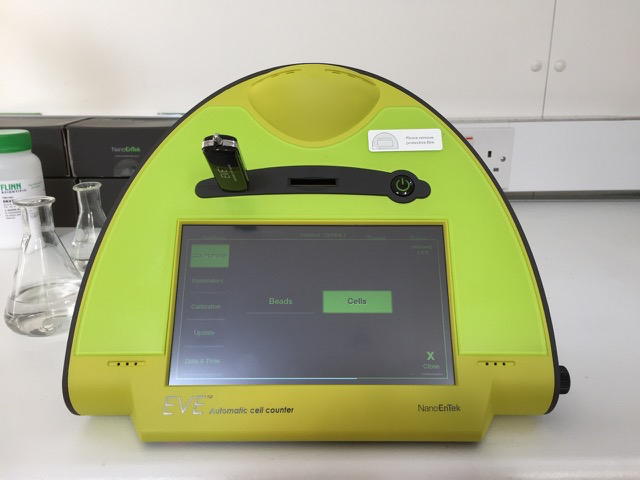 Immediately following the 20-minute test period, the blood from each vial was diluted in a ratio of 200:1 with a buffer solution of pH 7.41, followed by pipettor mixing with Trypan blue stain, and a cell counting via an automatic cell counter by NanoEntek Inc.

The results are summarised in Tables One and Two. For clarity and in the interests of confidentiality with the copyright holders of the music, the actual numbers of red blood cells per mL are not shown. Instead, the ratios between the numbers of viable red blood cells in the music environment versus those viable in the quiet environment are tabulated.

Table Two shows the results from six individual selections of music, in two concert pitches, 432Hz and 440Hz. The table also shows results from a gong performance and two levels of white noise. The music and gong selections show ratios between 4.13:1 and 18.1:1. Again, neither 432Hz or 440Hz concert pitch was found to dominate.

The highest number of viable red blood cells counted followed blood’s immersion in the sound field of a proprietary sound therapy device for 20- minutes, selecting a sound prescription labelled cell regeneration. It delivered a figure of 3.4 x 106 RBC per mL, versus 2.9 x 105 RBC per mL counted from the same blood sample after immersion in the quiet environment of the Faraday Cage incubator for 20-minutes.

The results from white noise tests were as follows:

An overall pattern can be seen in the data in which all blood samples immersed in music produced a higher number of viable red blood cells over those samples immersed in the quiet environment, in some cases significantly so. The question that arises is: why should music increase the numbers of red blood cells in vitro? We hypothesize that the lifespan of red blood cells in vitro undergo a transitional state between living and dead. The cell counter principle involves counting cells that have not absorbed Trypan blue stain because the stain cannot penetrate the live cell membrane and enter the cytoplasm. In dead cells, Trypan blue passes through the porous cell membrane and those cells are counted as dead by the cell counter mechanism. Hypothetically, red blood cells that are in a transitional state, with membranes that are damaged and/or gradually becoming porous, leading to eryptosis (death of red blood cells), regain their membrane integrity as a result of immersion in certain frequencies within the music, thus rejecting the Trypan blue stain and being counted as living.

Indicators to the frequencies that may assist the process of cellular rejuvenation can be gleaned from the results tables. For example, there is a significant difference in red blood cell viability between the female vocal track and the female vocal track with backing track. The backing track contains dominant low frequencies; the same holds true for the Dance-Techno-House music track and other pop music tracks. The two selections of classical music do not contain dominant low frequencies and both showed only modest results, however, it should be noted that some classical music (not selected for testing in this study) does feature dominant low frequencies. Hypothetically, the low frequencies in popular music not only produce sounds similar to a beating heart but, in a sense, act like one from the perspective of the effect on red blood cells. The low frequency sounds may contribute to a mechanism resembling that of the in vivo environment, in which low frequency pressure, provided by each heartbeat, aids haemoglobin molecules to uptake oxygen. If this proves to be the case, the increase in oxygenation of the red blood cells (that are in the hypothetical transition state), acquired from dissolved oxygen in the in vitro whole blood, could account for the cells being rejuvenated.

Suggestions were made by several correspondents to test the current preference by some musicians for A4 = 432Hz and A4 = 444Hz tuning, versus the international standard concert pitch of A4 = 440Hz. Proponents of 432Hz concert pitch typically report that the music feels smoother and more natural, while proponents of 444Hz tuning believe that it has the ability to repair DNA, among other qualities. While testing these assertions is beyond the scope of the present research the results showed no significant difference between music selections created in the three different concert pitches; all showed increases in the viability of red blood cells.

To date the experiments have been conducted only in vitro and there is a need for testing in vivo, to test whether similar results will be found. This will necessitate immersion of the entire body of a person, or specific body parts, in a music field, to establish if music affects the red blood cell counts and changes in the concentration of oxygenated haemoglobin. The encouraging results from the present series of experiments indicate that blood-testing volunteers in vivo will be an important next step in this research.

With grateful thanks to GreenMedInfo.com, Experiment.com, Sound4Health, roadmusic.co and to all our backers for their generous support. We also extend our thanks to Professor Ji of Rutgers University for his care and attention in overseeing the first series of music-blood experiments and consulting on this second series.