The Art of Cymatics

Some of the most beautiful expressions of Cymatics and the Cymascope used in Art.

Cymatic Art with the CymaPlate, a novel technique for creating sound art

A simple way to create cymatic art at home or school is with the humble yet sophisticated CymaPlate–a sand or salt-strewn metal plate that is vibrated by means of a violin bow. Cymatics is an emergent science but it is also an enjoyable new art form, blending art with science. There are many ways to make unique cymatic patterns with the CymaPlate.

For example, personal choice of media, such as colored sands and glitters give each pattern a unique texture and color palette; by making the plate ‘sing’at more than one pitch by bowing it twice while the particulate matter is still vibrating, creates composite frequency patterns that are often even more beautiful than single frequency patterns.In the past the challenge with CymaPlates has been to find a way to permanently capture the sand or other particulate matter, so that it can be wall mounted.

Now, thanks to a technique developed by John Stuart Reid, anyone, child or adult, can create cymatic art at home or in studio that can be hung on a wall. Part of the field trials for the new technique were held at the London-based Sci-Art-Met conference in May 2016, at which Reid gave a talk entitled ”Cymatics: A New Frontier in Science” He also hosted a fun workshop entitled, ”Cymatics: A new Frontier in Art” Workshop participants watched a demonstration of the CymaPlate, including how to capture and save the patterns as permanent art pieces. Many of the participants created their own works of cymatic art to take home. More information on the CymaPlate kit 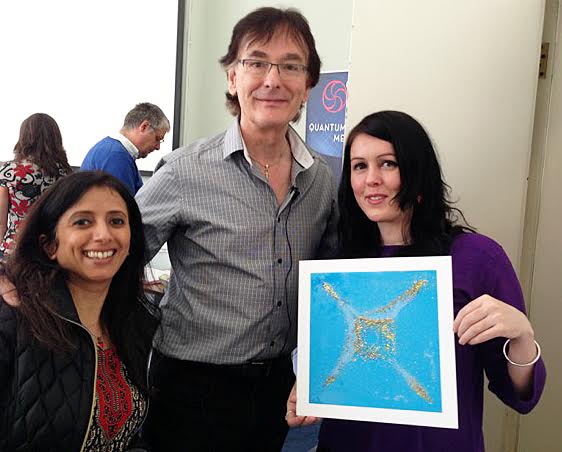 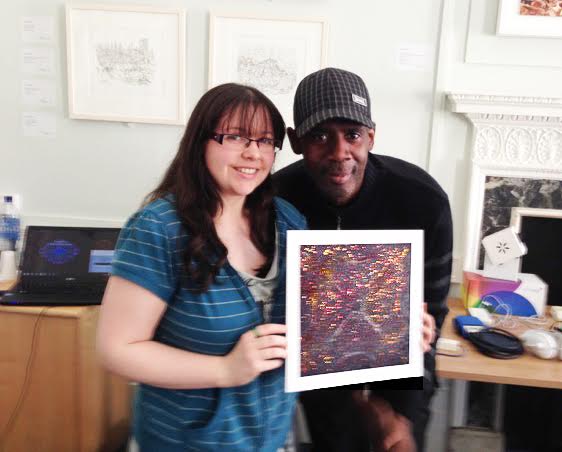 Essence Illumined – Artist and writer, Lynnclaire Dennis, is blessed with the rare ability to see sound.

Her special gift is powerfully evident in much of her art, which she describes as ”Essence Illumined”. Lynnclaire’s unique style naturally encapsulates many of the cymatic forms that the CymaScope team are fortunate to see every day in our laboratory.

“Following two Near Death Experiences in 1987, when a neurologist tried to get me to put a 2D puzzle of stars and shapes together, I refused, saying ”It’s not the way it works.” When he asked what I meant, I said, ”Listen. Can’t you hear them? It’s not how they fit together.” As inexplicable as it seems, the cerebral trauma induced by two severe hypoxic (lack of oxygen) experiences awakened some kind of unusual cognitive ability; the ability to hear and accurately draw the angles that create what I call ‘The Music’, the music of sound, light, time and matter; it’s what matter is; how matter moves; and it’s love.

Four years after the accident, and a third NDE, the geometric angles I was seeing in sounds led to ‘angels’ in spheres and catalysed a 26-year career in mathematics and physics. Painting the inexplicable has kept my inner world vibrant through many healing experiences.

I call my art ‘Essence Illumined’, each piece having a spherical nature that one friend likened to the ultimate in Christmas ornaments. When I compare my work with what is being revealed through the CymaScope, each is an expression of understanding that ignites with a sound that comes from a person or an experience. It is a means of releasing my mind and heart from the illusion of straight lines and the ‘straight and narrow’; to artistically help myself and others by making the invisible visible in the elegant but exasperatingly fast flow of life. Each represents a state of self-granted grace; a moment to honour the heart’s desire .

Seldom if ever does a preconceived idea last more than a few hours; most are whited out to the dismay of many who watch, unaware of my process. A single aspect habitually finds its way into my play: the Golden ratio.

Even this is simply a matter of waiting and watching for how it appears. Simply put; my art is like my work; ‘high play’, an opportunity to create unity through diversity.”

You can see more of Lynnclaire’s wonderful art work on her web site: www.starstuffglitter.com 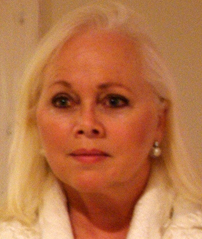 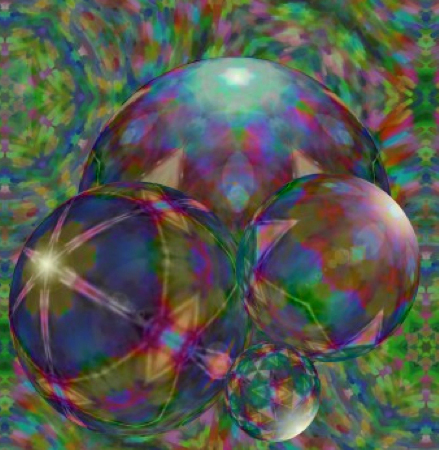 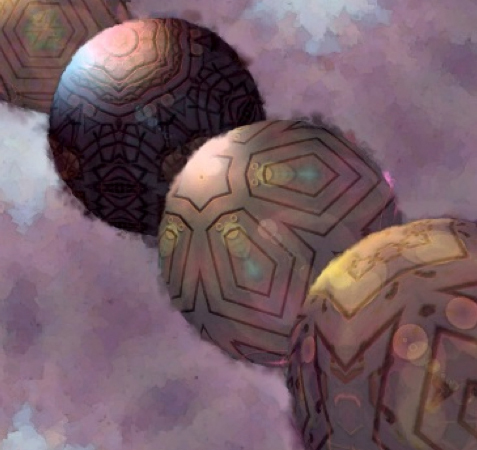 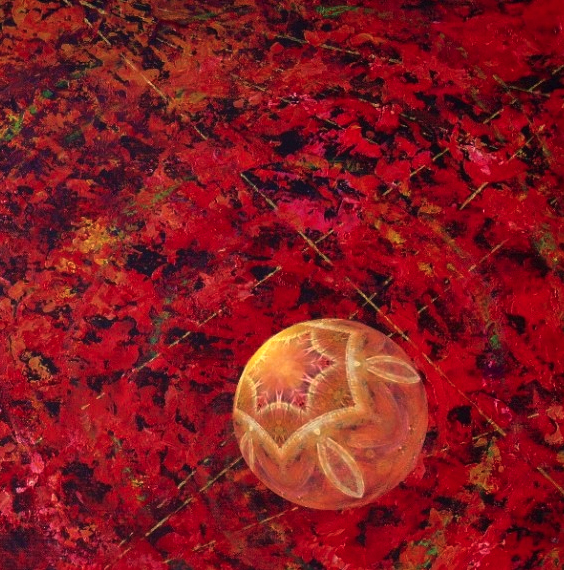 Artist, Oliver Halsman Rosenberg, has been exploring a new style of art he has named ‘Spherism’, based on the spherical nature of sound and electromagnetic energy. His novel style also echo’s cymatic forms, which naturally pleases the team at CymaScope.com. 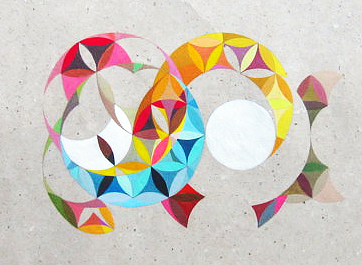 Oliver takes up the story of how Spherism evolved…

The circle was the first image I drew, and have continued to draw my whole life, because my name Oliver begins with that shape. Sound, vibration, and form began to play a major role in my art in 2001, after a friend showed me a demonstration of Cymatics. I was also studying sacred geometry at the time, and an explosion of inspiration came when I linked these scientific concepts with my understanding of the vibratory nature of reality according to Eastern philosophy. Art has the ability to communicate scientific discoveries to the masses through a process of transmutation. 100 years ago Picasso and Braque predicted the digital age with ”Cubism”, which showed how the world could be observed from many angles simultaneously. I came up with my own visual vocabulary which I playfully call ”Spherism”. I hope to be one of many voices bringing liberating information to the public about the fundamental nature of the energy which makes up our reality, and reveal new possibilities of relating to the world around/with-in you.

I have taken inspiration from Western science and mathematics (like Marko Rodin’s Torus breakthroughs and Grigori Perelman’s resolution of the Poincar conjecture), as well as the canons of Eastern esoteric wisdom (the study of Indian Mantras, Yantra and Tantra, as well as Buddhism conception of the void). The period of time we are experiencing now is full of great opportunities for enlightenment. Most of the sacred texts are revealed and available if you look for them, and scientists are discovering through developments like the CymaScope and the Large Hadron Collider that it is space, vibration, and energy that make up our reality. In my art I not only use ancient symbols as vessels for the understanding about the vibratory nature of the Universe, but I also transform mundane imagery like cereal boxes, or covers of magazines into abstract formations which imply that vibrations and spheres make up our life at the highest and lowest levels. I also use Tibetan Singing bowls to work directly with vibrations, and as technology develops I hope to do more interactive art projects that allow people to engage with Spherism not just as an image, but also as an experience.

The CymaScope is a technology full of amazing possibilities to demonstrate the reality of vibrations and how they affect us in so many ways on a day-to-day basis. It is my hope that once people realize the inter-connected nature of all of reality through vibrations, they will have a shift in consciousness and begin to understand how they are not separate from anything they perceive, and how what they perceive is directly influenced from the vibrations they send out from their heart.

May science help to liberate all beings from suffering.

In 2006 the celebrated American artist, Ray Pierotti, attended the first international conference based on the sound healing modality, Cymatherapy. One of the guest speakers, John Stuart Reid, demonstrated the Cymascope, an instrument he developed with gifted American design engineer, Erik Larson.

Reid’s talk and demonstration inspired Mr Pierotti to manifest a concept he first dreamed about as a teenager in the Wasatch Mountains, the creation of art that is able to capture and connect the ephemeral world of sight, shape, and sound. Ray Pierotti takes up the story:

“The demonstration of the CymaScope in Atlanta, in 2006, was something of a revelation to me: John Stuart Reid was able to show slices of sound suspended in a water medium. For the first time I was able to ‘see’ sound and understand its spherical nature. For me this crystalized a principle I had first dreamt about in my teenage years in the Wasatch Mountains: the visual connection between sound, chakras, color, states of mind, body organs, numbers, shapes, astronomy, and astrology. All enjoyed visual attributes. All were vibrating ‘systems.’

The CymaScope demonstration gave me the final element needed to create my ‘Gateway to the Divine’ series, based on the number 7. I call the seven paintings of the series–along with music composed by me “pictumsonus,” from ‘sonus,’ meaning  ‘of sound’ & ‘pictum,’ meaning ‘to paint.’

The subject matter of the work concerns the seven different ways in which people seek to find their divine nature through universally adopted symbol systems. One of those means is sound.

I like to think that ‘the muses’ introduced me to Cymascope.com! The series could not have been realized without the generosity and support of Reid and Larson. Their permission to use the CymaGlyphs, which Erik created on the Cymascope, provided me with visuals of the seven notes of the western scale. I integrated these circularimages into the paintings and musical scores along with the rest of the elements used to represent the seven different universal approaches. Each painting was created in 49 layers on an untreated cotton fabric stretched over a thin wood panel “

Ray Pierotti’s web site is a treasure trove of beauty and artistry. The team at CymaScope.com highly recommends a visit:
https://www.raypierotti.com 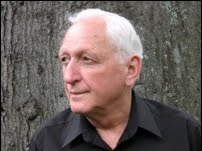 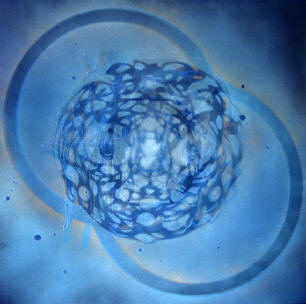