Dr. Rupert Sheldrake and Dr. Merlin Sheldrake carried out a rigorous investigation into Faraday Waves— the scientific term for Cymatic—using the CymaScope instrument. Published in the Water Journal, October 2017 edition, their paper is titled, Determinants of Faraday Wave-Patterns in Water Samples Oscillated Vertically at a Range of Frequencies from 50-200 Hz. Their landmark paper extends the study of Faraday Waves far beyond other papers on this subject, using novel techniques that permitted precise control of the acoustic energy entering the CymaScope’s visualising cell and encompassing a broad spectrum of pure frequencies.

This paper is rigorous in its approach and provides a solid foundation upon which many CymaScope- related research projects can be built. We consider it to be seminal, and recommend it to anyone with an interest in the relationship between sound and form. Michael Faraday began a series of beautiful experiments on acoustic figures in 1831 with the goal of gaining insights into the nature of vibration. He wrote, “I am inclined to compare the diffusion of magnetic forces from a magnetic pole, to the vibrations upon the surface of disturbed water, or those of air in the phenomena of sound; that is, I am inclined to think the vibratory theory will apply to these phenomena as it does to sound and most probably to light.”

Faraday experimented with sand and water on a glass plate, exploring harmonics, and wrote, “On putting a candle exactly below this plate and holding a screen of tracing paper an inch above it, the picture given was beautiful. Each heap [of sand] gave a star…of light at its focus which twinkled…this was exceedingly beautiful and easily rendered visible to a large audience.”

There can be no doubt that Michael Faraday, after whom Faraday Waves are named, would have been pleased see that the experiments he began in 1831 are being continued almost 200 years in the future, and that “crispations”, as he named this class of phenomena, are beginning to be applied to many different branches of science.

Dr. Ralph Abraham, professor of mathematics at the University of California Santa Cruz, who is mentioned in the paper, considered vertically oscillated water as an analogue computer for dynamic catastrophes, just as the CymaScope instrument can be considered a form of analogue computer that can be applied to explore many different forms of vibrational phenomena.

The Sheldrake paper can be found in PDF form at this link: http://www.waterjournal.org/uploads/vol9/sheldrake/WATER.2017.10.Sheldrake.pdf

The paper can also be found at Dr. Rupert Sheldrake’s web site, at this link: https://www.sheldrake.org/files/pdfs/papers/WATER.2017.10.Sheldrake.pdf 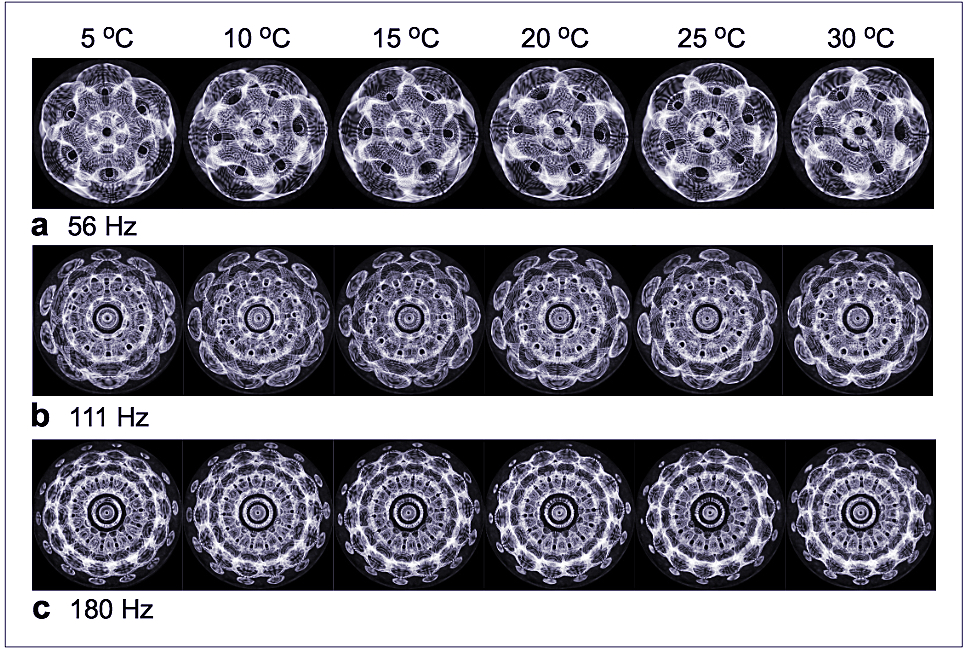 Figure 9 from the Sheldrake paper, revealing that temperature of the water in the CymaScope’s visualising cell did not alter the overall morphology of the pattern and had a negligible effect on the degree to which patterns were expressed. Patterns formed at six temperatures (5oC, 10oC, 15oC, 20oC, 25oC, and 30oC) are shown for each of the three sample frequencies. (Reproduced with permission of the authors.)